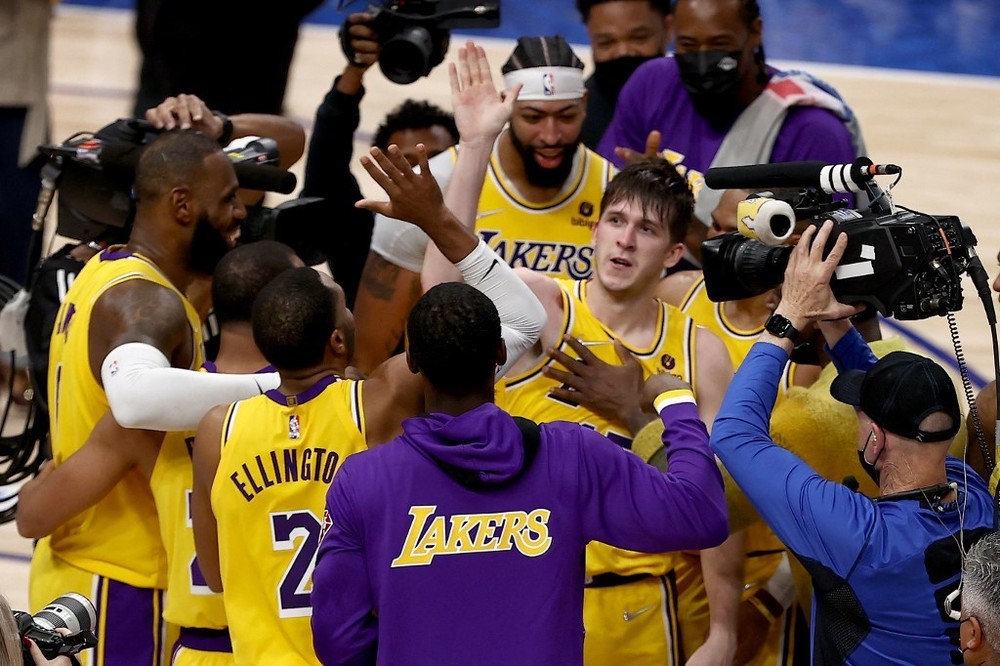 Austin Reaves was passed on by all 30 NBA teams just five months ago. Now, Lakers fans are calling the rookie guard a hero. Reaves, an Oklahoma product, hit the game-winning 3-pointer in overtime to secure a 107-104 Lakers win against the Mavericks on Wednesday night. Reaves played a career-high 32 minutes in the game, recording 15 points and seven rebounds with the Lakers’ roster diminished this week due to players entering the NBA’s health and safety protocol.

After Reaves went undrafted in July, he signed a two-way contract with the Lakers in August, and a standard NBA deal in late September when L.A.’s roster was riddled with injuries.

The 6-foot-5, 197-pound guard shared quotes on Instagram at the time, such as, “Control what you can control” and “I’ve been counted out so many times, I couldn’t count it.” Reaves played basketball for Wichita State from 2016-18, before he transferred to Oklahoma, where he sat out his junior year due to NCAA’s transfer rules. As a senior Sooner, he averaged 18.4 points, 5.5 rebounds and 4.6 assists per game, and earned his First Team All-Big 12 honors. In March, Reaves declared for the 2021 NBA draft, forgoing his remaining college eligibility.

On Wednesday, the Arkansas native finished the Lakers’ win with a new career-high 15 points and seven rebounds. He hit 5 of 6 3-pointers. After his big night, Reaves told reporters he’s “always been underrated” on the court.  “I mean, it’s basically been the story of my life,” he said, adding he didn’t attend a “big high school” or “get recruited much.”

The 23-year-old was celebrated in a jumping huddle by LeBron James and more of L.A.’s future Hall of Fame and All-Star roster. His veteran teammates gave him shoutouts on Instagram, including James, Carmelo Anthony and Rajon Rondo. While discussing the Lakers’ celebrations, which included dumping water over his head in the locker room, Reaves said, “I’m lost for words. I mean, I’ve grown up watching all of these guys play, so for them to … for me to even just be teammates with them is special.”

Reaves is still figuring out how he fits on a Lakers roster that’s faced its fair share of troubles this season, between injuries, 12 new additions and navigating a COVID-19 world. The rookie has developed into a strong defensive player for the Lakers and was averaging more than 20 minutes a game before a hamstring injury sidelined him for two weeks in mid-November.

Reaves comes from a family of basketball players. His mother and father played at Arkansas State, a school Reaves turned down an offer from. His mother was an all-conference forward. His father played point guard and is tied for third on ASU’s career assists chart. Reaves’ brother, Spencer played at Central Missouri. His Instagram page has just 25 posts containing all basketball photos from his time in Oklahoma, and now in Los Angeles.